The other day, a very good friend told me about this movie she and her husband just watched.

“It’s about Rich Mullins…do you know who he is?” 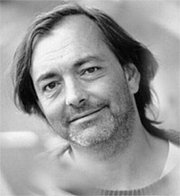 I didn’t, since he was a Christian musician and I don’t tend to listen to Christian music.  I also try to avoid Christian movies for the same reason: the music tends to be trite, and the movies tend to be cheap and preachy.

The thing is, I know good art.  That is a pretty audacious claim, since the genre of arts is full of self-inflated egoists (I should know…every writer and artist should know.  Just submit your work to be published!  Your ego will deflate almost as soon as you send your work).

Good art is amazing.  Good art will take your breath away.  Good art will touch you in a place that you thought was a secret place, and yet you can see it on the canvas; you can hear it in a song.  The grief that has no words is suddenly fleshed out on the radio.  The joy you cannot contain is displayed in a photograph.  The hope you have burning in your soul is written by someone else who feels the same thing, which just blows your mind.

Art is the connection between our souls, and the amazing thing is that it connects us all throughout history. 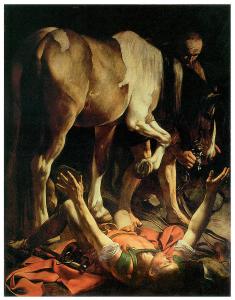 The Conversion of St. Paul

“The Conversion of St. Paul” is a great example.  The experience of conversion can be overwhelming for some of us.  It is feeling the Holy Spirit for the first time flood our hearts with irrepressible Godly love.  For some of us, the feelings are just incredible…like, knock you on your back incredible.  Paul was a mighty man who shrank from no one.  He took on the Pharisees, the Romans and every person who challenged his faith.  But in this picture, he is overwhelmed by God.  He is on his back and clearly in an emotional moment.  This moment is what connects with the audience.

There have been some Christian music that has similar experiences, like songs from Mark Schultz.  That man has the gift of songwriting, no two ways about it.  He can cut through the fruit and get to the core of the moment right quick.

Just listen to “Walking Her Home”  It is good art.

It turns out I have actually heard some of Rich Mullins work.  He wrote “Awesome God,” which I have sang many times in church…or at least the chorus.  Apparently there is a whole song that I have never heard before, which is just incredible songwriting.

The reason why I watched the movie, “Ragamuffin,” was because my friend said this: “He was really a tortured soul.  The entire time we were watching this we said, ‘Tamarah has to watch this.'”

A few things about his song, “Elijah”:

This is a seriously heartfelt pianist.  The music is coming out of him like a firehose…I love that.  I love the intensity of his music.  It feels like he really believes it, he’s not just playing a song.  That is an artistic authenticity that is hard to find, in any time period.  But when you see it, you know it.

Second, that is a dark song.  When he was making albums, his producers kept trying to get him to write “happy, upbeat songs.”  His response was something along the lines of, “If I’m writing good music, why bother writing bad music?”  He was difficult to work with…which I completely understand.  As an artist, you really do have to stand up for yourself.  No one else will unless you have “made it” and are selling millions of dollars worth of your work.  Until then, you are an island.  And that is where most artists not only make their best work, but it is also where we prefer to be anyway.

But third, that is amazing songwriting.  Amazing.  And I get it…I totally get what he’s saying:

“But when I leave I want to go out like Elijah
With a whirlwind to fuel my chariot of fire
And when I look back on the stars
Well, It’ll be like a candlelight in Central Park
And it won’t break my heart to say goodbye.“

That is exactly what I feel…this is what connected me to his moment.  I refuse to live a mediocre life.  I am just not that type of person.  I want to live something that is wrought with gallant failures and blazing success, and loving the people in my life with bouquets of rainbows.

But mostly, I want my life to be something meaningful.  I am not going to change the world, but maybe in my little space of it I can make a garden for weary travelers.  Some will stay and some will go, but they’ll remember when they were here…and it was interesting.

An obituary of Mullins had some quotes from him:

“Mullins often referred to himself as an ‘equal opportunity offender.’  Many of the things he said prove it:

The secret of rock music: “If you can t be good, be loud.”
The current trends in worship: “Shallow, mindless, stupid, and perfectly harmless, at best.”
“I don’t want to be tolerated. Argue with me, and I will respect you.”
“It never fails. God will put people in your path that irritate you, especially if you’re prone to be irritated.”

“I hope I would leave a legacy of joy -a legacy of real compassion,”   -Rich Mullins.(reference)

My friend apparently knows me better than I expected she did (I’m afraid artists are not as secretly mysterious as we would like to think we are).  She saw the intensity of Rich Mullins’ life and immediately knew I had to see it as well.  I know some of us feel this same blazing, magnesium fire in our guts all the time.  You know it when you see it.

There aren’t many truly amazing artists who are so genuine, so intense with their work that they take your breath away.

But there are a few.

And Rich Mullins’ life took my breath away.