During the odyssey of moving, things will, invariably, get lost.

This is a fact that is just bound to happen.  You just can’t pack a life into little boxes and expect your life to stay the way you remember.

Take keys, for instance.  We would put our keys on a bookshelf next to the garage door whenever we came inside.  It was a handy place to stash our keys that was out of reach from little fingers, and it worked really well for us.  So what happens when you pack the bookshelf?  You have to find another place to put your keys.  And you may not always remember where this new place is…

Thankfully, we have not lost any keys, although it was certainly a worry I had on a daily basis.  That would just be a pain in the neck we didn’t need.

However, there are some things we are used to having that did not come with us on the first trip: the bathrobes.  The laundry hamper.  The box of computer cables.  The bikes.  The rain boots.  They are all waiting for us in the garage for our second, and final, return.  But they aren’t lost either.

The only things I have been most worried about losing have been the living creatures we brought along with us.  The kids, obviously, the dog, the cats and the chickens.  Except for one very whiny cat (for two whole days straight, in the front seat of the car, emphatically pleading with us as if we would cave in and let her out…think again, kitty ), all of the living creatures did great!  8 1/2 hours the first day and 9 1/2 hours the second day, and everyone was a total trooper.  We all got through the very long trip with our final destination as the motivating factor to keep going, and finally arrive at our new home.

What we found, when we finally got here, was the previous owner and some of her friends still working on the house.

It was a little odd, since the house was not only ours at this point, but she had pushed the closing date by a month so she had more time in her home.  Which is completely understandable: she had raised her children in this home for the past 17 years, and she was being forced to leave all of her cherished memories and sacred moments behind.  They will all be replaced by another mother’s cherished memories, and she clung to the door frames until she actually saw the new family arrive.

What surprised me most was what happened next.

She and her friends showed us around the house, warned us not to mess with the water on the washer (“just don’t mess with it..you’ll want to. But don’t.” Those are words from experience), and watched all the kids barrel upstairs with Christmas morning energy to find their new bedrooms.  I had never actually been in the house before this, funny enough.  Ben had, and he said I would love it more than I could imagine; but I had never set foot into our new home.  I had spent the last few months looking at pictures of our new home and in futility, trying to figure out where things would go, remotely.  My first steps into the forest green home with a crisp white trim were a dream like blur.  I knew there were people here, there were kids upstairs, there was a diaper that needed to be changed…and after 9 hours of non-stop driving behind our rented U-Haul, I had no idea what my appearance had come to.

The previous owner and her friends told me they had spent all day making sure the house was clean for us.  There was water in the fridge for us.  They made sure there were night lights all around the house, so the kids wouldn’t get scared at night in their new rooms.  One of her friends said, “Listen…there are children in the house again,” which drove all of us mothers in the room to share the box of Kleenex.  Then, with a tearful smile and a very huge, motherly hug, she said, “This is your home now.”  And gave the house to me.  And she left.

She just wanted to see who would fill her home with new memories.  She just needed full closure on that season of her life, knowing she left it to someone who would love it just as much as she did. 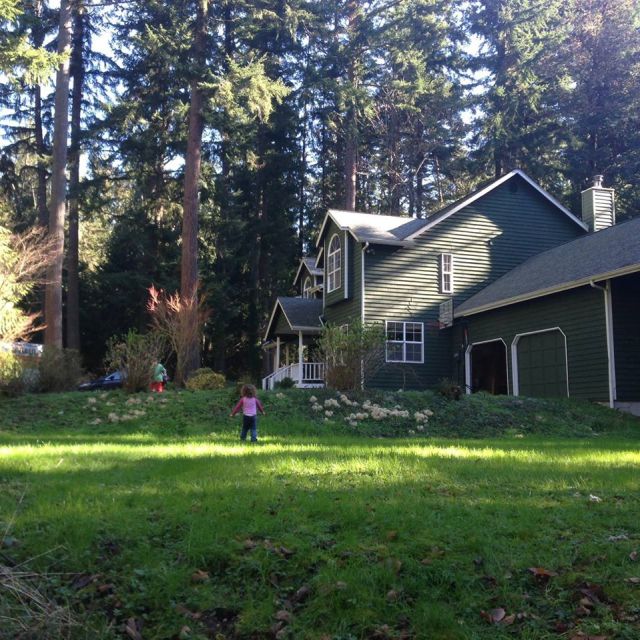 This home is the home I could only dream of finding.

It has beautiful hardwood floors downstairs, a warm brown carpet for the bedrooms upstairs, and spaces for beds, toys, Lego workbenches for the boys and window seats for the girls.  The master bedroom has an enormous brick fireplace which is flanked by open windows overlooking our forest.  Our kitchen faces the east, so I can watch the sunrise through the moss covered trees every morning.  Our driveway descends down to our dirt road that leads to our rather remote house, on the far side of the island.  I have raised gardens, sprouting rogue squash that never died over the winter.  There are bushes with tiny yellow bell flowers beginning to bloom.  There is an old treehouse that is in need of repair, which is already being planned by the kids.

This is a home.

It is our home.

I couldn’t imagine, as a young girl growing up on the scalding and lifeless black concrete surrounding my elementary school in the middle of LosAngeles, that one day I would be raising my children in a beautiful home, in the middle of a forest, on a dirt road on an island.  Who would dream of such a thing, especially in LA?  Dreams were something you had to inherit, I thought back then.  They weren’t something you could work towards, or even conceive as being real.  They were just dreams that got you through the day.  Islands were for pirates or hotels.

I wonder, now, what my children will dream about.  What will they imagine for their future.  Where will they raise their families when they get older.

There are things we lost since we left.  Ben and I had spent a good 20 years exploring SanFrancisco, and all the cherished memories we had stayed there.  I cried during our last date while we drank a cocktail and overlooked the city at night, for the last time.  The childhood I had envisioned for my children is definitely changed since we moved.  Old dreams, old visions, old plans were lost by moving so far away.  What we found was new adventures.  New childhood memories.  New treasured moments.

Change is one of the scariest things to experience in life.  But if the forest never changed, how would it ever turn green?

5 thoughts on “Let’s Get Lost”

Leaving a trail of glitter through the dirty adventure of life.